The first edition of Identities in Motion (4 March 2016) dealt with the concept of postcolonial mobility as a key factor to understand contemporary Italian society and culture in all its multifarious facets.

The significance of the Italian colonial past in the understanding of the current discourse about migration and intolerances in Italian society featured in the session ‘Legacies of Colonial Mobilities’  with Alessandro Pes and Valeria Deplano, who presented the book Quel che resta dell’Impero. La cultura coloniale degli italiani.

The discussion on the documentary Aulò. Roma Postcoloniale by Simone Brioni (in conversation with Linde Luijnenburg) focused on the practices through which scholarly-engaged directors are crafting media products dealing with migrations and postcolonial memories in Italy and, more broadly, in Europe.

The postcolonial and transnational perspective to read Italian society was addressed also in Charles Burdett‘s session on his book Italy, Islam and the Islamic World. In his conversation with Goffredo Polizzi, Burdett looked at the construction and redefinition of the idea of Islamic ‘otherness’ in Italy since 9/11.

The session Madrigne in un’unica partitura (with the founder of the Compagnia delle Poete Mia Lecomte in conversation with Loredana Polezzi) promoted an original space to reflect upon contemporary representations of fluid identities in performative and literary arts in the Italian language.

The performance Queen of flowers and pearls by the Italo-Ethiopian writer, performer, and musician Gabriella Ghermandi concluded the day. In her whole artistic production, Ghermandi problematizes the complex subjectivities between Italy and its former colonies. The day before Identities in Motion, Gabriella Ghermandi met the students in Italian of the School of Modern Languages and Cultures and the postgraduate community and part of the Transnationalising Modern Languages staff. 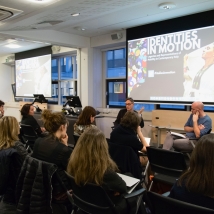